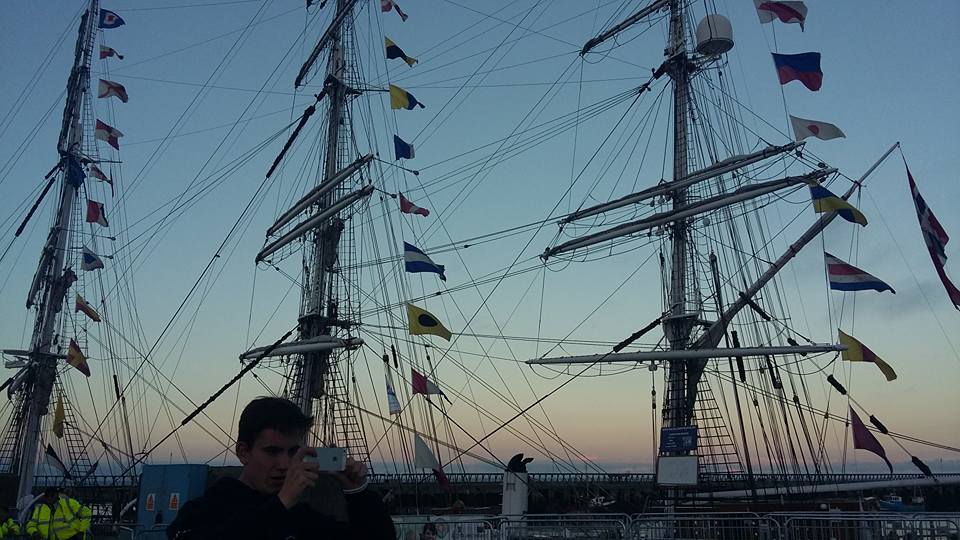 Hi I’m Paul Cozens and I’m a volunteer here at Silx and I have recently just returned from Gothenburg in Sweden where I was a trainee crew member on board the Christian Radich as part of the North Sea Tallships regatta race, I was chosen by Northumberland County Council Youth Service to be a trainee and I would like to share my diary of experiences with you.

‘First Day on Board’

At 2pm I headed to Blyth Harbour, shed 15 to meet the rest of the crew. I had already met my other crew members during a residential a few weeks ago so this helped with my nerves. Once everyone had arrived we were all given our team hoodies, coats and wellies and then headed to our home for the next week ‘The Christian Radich’ which was one of the largest ships docked in Blyth over the Bank Holiday weekend.

Once on board we had our passports checked and were allocated our crew numbers- much to my surprise I was given number 5, my lucky number! We were then able to unpack and were shown where we needed to sleep- some crew members were given beds and some of us were allocated a hook, for our HAMMOCKS, which were were actually surprisingly comfy!

After settling in we were given some free time to enjoy the fair and watch the fireworks display and we needed to be back on board by 10pm. Once back on board all the trainees helped the crew tidy up after their crew party and got settled for the night and we were shown how to put up our hammocks, lights out at 11pm! The first night on board did feel a bit strange bit I enjoyed it and eventually fell asleep.

‘The Day we set Sail’

We were all woken up at 6AM! I must admit this was a little bit of a shock to the system! Once we had folded away our beds and got ready it was time for breakfast. It was not the bacon and eggs I was expecting, instead we had salad- apparently this a traditional Norwegian breakfast!

After breakfast we headed up on deck to the ‘Bow’ where some of the trainees had photos taken and were interviewed, this was a great opportunity to take some selfies! Bets were placed to see who would be sea sick, I was determined to win this bet!

at 11AM my family and friends came to see me and say goodbye- we stood on the stern section on the ship which was the best place to see them, lots of photos were taken and me and Dana were privileged enough to be asked to hold up the British flag! at 12:45 it was time to say my final goodbyes and we set sail, I was very excited but also a bit emotional especially after seeing my Mam and Sister crying on the dock!

Once at sea the hard work began and we had to pull the ropes to raise the sails- this took a while but we kept ourselves entertained with a sing song to ‘Uptown Girl.’ At sunset we all met on the Stern to be given our shift times for the week, I was given the 8-12 shift! then we had dinner- Salad again!

After dinner we were all given the opportunity to enjoy the sunset on deck before our shifts began- I used this opportunity to get to know my crew members- we even heard Dolphins! We lay on deck staring at the stars and it was beautiful. We all headed to bed for lights out at Midnight.

Woke up, had breakfast- I had a shower which was actually nicer than I thought and our shift began. I was given the job of  Safety- which meant I had to check the freezer temps, check for fire hazards and make sure all crew members had everything they needed. During the morning we had an opportunity to climb the mast- I gave it my best shot but fear got the better of me and I had to come down- I was a little bit disappointed but pleased that I gave it a go! We had a break for lunch and then enjoyed the sun up on deck for the afternoon.

At 6pm we had our first proper cooked meal on board- Fish Curry and Rice, I didn’t think I liked fish but this was unreal!

At 8pm we had to get back to work, I had the job of lookout from 11pm-12am. This was my favourite part of the day- so peaceful, this is when me and Steve perfected our dolphin impression and we actually attracted some Dolphins to the boat, this is what prompted me to be given the nickname the ‘Dolphin Whisperer’

Woken up at 6AM by Steve- the ship was on a tilt and much to everyone’s amusement I fell out of my Hammock! oops! We weren’t used to the tilt and we took a while to get our balance back, getting ready was comical!

I wasn’t given any shift work today so I used this opportunity to catch up on some sleep! We were taught all about the lifeboats today and how quickly to get off board in an emergency, luckily we didn’t need to put this in to practice.

Later on, up on deck myself and Wayne entertained the rest of the crew by doing impressions of Captain Jack Sparrow! More time for selfies too!

Dinner tonight was amazing! We had Sausage and Mash, I enjoyed it so much I had 4 helpings!

We were close to the shore we knew this as we could see the boarders of Denmark so we had to put the sails down, I was on look out duty again tonight from 11pm- it was a lovely, peaceful end to the day!

We arrived into Gothenburg earlier than we thought so today we had to Anchor off in the middle of the sea until we were told we were able to dock- because of this there were no duties today.

Myself and the other trainees had a chill out day on the deck. We were fed well today- lunch was cheesy pasta and tea was lamb stew which was the nicest lamb stew I have tasted EVER!

We had a chilled out morning then arrived into the dock of Gothenburg at 3pm, we were informed at this point that we had come 2nd in the race! This was a very proud moment!

The captain of the ship then had the honour of presenting us with our certificates and T-shirts and were interviewed getting of the ship, it was such an amazing feeling knowing I had completed the journey and arrived safely in Sweden!

Today I got off the ship and explored the shopping Mall in Gothenburg along with some of my other team mates. We changed our English Money into Swedish Krona- we headed straight to McDonalds and did a bit of shopping!

After a long and exciting day, I was pleased to get into my hammock at midnight!

Today I was interviewed again by Andrew from Northumberland Sport and had my first full day in Gothenburg! We explored Gothenburg and even discovered a Swedish Sweet Shop where sweets filled the place from top to bottom!

Today I also got to speak on the phone to my family, and it was great to hear their voices- I even heard from the workers at Silx!

Today was my favourite day in Gothenburg! We got up early and were taken by coach to a 7-A-Side pitch where we played football representing the Christian Radich against a team from Russia! This was a phenomenal experience and not something I thought I would ever get the chance to do.

When we returned to the dock we enjoyed Bacon Sarnies on board and began packing our stuff as we were leaving early on Monday.

Sunday night was our crew party- we had a great time dancing, walking the red carpet, we accepted our well deserved trophy and enjoyed the parade. We partied long into the night and crashed out after midnight for our final stay on board!

Today was emotional, we got up at 5AM and said goodbye to the Christian Radich and all of its crew and headed to the airport.

I was very apprehensive as this was to be my first time on a plane, but once I was on board I was absolutely fine! We touched down at Heathrow where we caught our connecting flight to Newcastle.

Once we arrived in Newcastle we were greeted by lots of cameras and we had photos taken and were interviewed again.

Overall, this experience has been epic and life changing and I am so honoured that I was able to do it. I have friends for life and I feel it has really changed my life for the better- we left Blyth as young people and returned as adults and I’m excited to see where this takes me in the future!